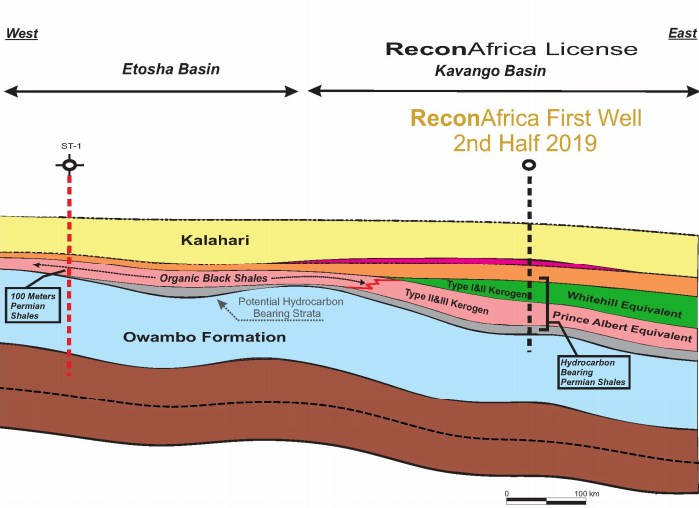 ReconAfrica has reported that it is now funded to initiate and complete a three well drilling program in the most opportune parts of Kavango Basin, with the initial goal of establishing an active Permian aged petroleum system. ReconAfrica is scheduling the spud of the first well (6-2) early December, 2020 but is aware additional logistical and supply chain delays presented by the COVID-19 virus may play a role in execution, although only measured in weeks.

“With the very successful completion of ReconAfrica’s recent round of funding of
approximately C$23 million, the Company is now well positioned to begin its evaluation
of the Kavango Basin, one of the world’s last remaining undeveloped deep sedimentary
basins,” stated Scot Evans, Chief Executive Officer. “

The campaign will use the Company’s 1000 HP Crown drilling rig (Jarvie-1) purchased in Q1 2020, which is completing refurbishment and upgrade by Henderson Rigs in Houston.  ReconAfrica says despied time lost to COVID-19 related shut-downs work has resumed and on track to complete the refurbishment by October, 2020, where subsequently the rig and all ancillary equipment will be shipped from the Port of Houston, Texas to the Port of Walvis Bay, Namibia and on to the first of three drilling locations in the Kavango Basin, northeastern Namibia.

ReconAfrica adds it has now completed the well designs and tendered the drilling service
program in full and has received strong support for all operations from the
industries major service companies and local contractors. It adds all bids have been received and are currently under evaluation by the Company, with contract awards targeted for the middle of September 2020.

Nick Steinsberger, Senior Vice President of Drilling and Completions, states; “the Crown
1000 HP is a strong and very capable rig. In addition, we are making upgrades such as
installing a 250 ton top drive and a 3rd mud pump for deeper and faster drilling, as well
as several key upgrades to safety related systems. The entire rig and ancillary equipment
are being worked through thoroughly so minimal downtime can be expected when drilling operations begin in December.”

Seismic Campaign
The success of the recent funding program has also enabled the acceleration of the 2D
seismic acquisition, processing and interpretation program. The seismic program will be
executed in parallel with the drilling campaign, and the combined results will define the
full exploration and development program for 2021 and beyond. Importantly, the program will provide critical support for conventional reservoir prospect refinement. The initial 2D program will cover 400 KM with a targeted start in late Q4 2020.

“The upcoming drilling and seismic campaigns have a strong technical underpinning,
delivered this year by the ReconAfrica technical team,” according to Mr. Evans. A
complete regional structural study was completed, providing a refined picture of the
tectonics of the Kavango basin, the initial development of traps for conventional
reservoirs, and providing the basis for initial and numerous source rock evaluation.

ReconAfrica owns 90% interest in Petroleum Exploration Licence 73 covering the Kavango Basin in northeast Namibia. NAMCOR holds the remaining 10% interest in the Licence, with its costs carried to the development stage. The Licence has an exploration period comprising three phases, ending 29 January 2024, or if extensions are requested and granted, ending 29 January 2026.