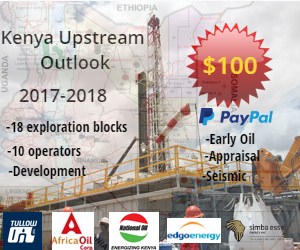 A majority of seismic and drilling activity in Kenya will concentrate in the Lamu and Mandera basins this year away from the traditional South Lokichar area according to the 2018 Kenya Upstream Outlook released in December 2017.

According to the outlook drilling of two wells has been confirmed in these basins with a potential of another three wells yet to be confirmed as well as 160km of 3D seismic in Q1 2018 in the Mandera basin and 1000 kilometers of 2D infill seismic in the Lamu basin. Potentially some seismic will be acquired over the El Wak in Mandera and over the Mombasa High after completing an airborne gravity and magnetic survey in Blocks L17/18.

In Block 9 in the Anza basin the operator plans to reprocess 300 line kilometers of 2D seismic data, conduct geological and geophysical studies and reevaluation of the identified prospects in the block as well as re-evaluate the first gas discovery well in the block in 2018.

In Blocks 10BB and 13T that have seen a majority of the drilling over the past three years activity is expected to drop as the joint venture partners focusing on entering the development phase and work moving from the field to boardroom negotiations. Some activity like extended well testing will continue in the fields. In these two blocks the main focus will be the early oil pilot scheme expected to commence in Q1 2018 transporting crude oil by road from the South Lokichar oilfields to the Changamwe refinery based in Mombasa for storage before export.

Still in the tertiary rift basin 2018 will see the processing and reprocessing of earlier acquired seismic over the Kerio basin and Nyanza graben as well as the potential additional seismic and drilling in the southern Block 14T controlled by National Oil Corporation.

Offshore there is expected renewed activity with oil prices having surpassed the $60 mark mostly on earlier earmarked projects prior to the 2014 price dip mostly to heed to work commitments prescribed in the various PSCs.

The focus of activity on new blocks that have in the past seen less work opens up prospects for new entry contractors especially in the field of drilling, seismic acquisition, logistics and security services with earlier contracts dominated by several companies.

The 2018 Kenya Upstream Sector Outlook report is a 19 page production by OilNews Kenya and costs $100 per copy available via pdf. Other than the Kenya outlook also available include the Tanzania and Uganda versions. Outlooks bought between January 1st and 6th January enjoy a 25% discount. To get a copy contact Sam: +254724684368 or sales@oilnewskenya.com