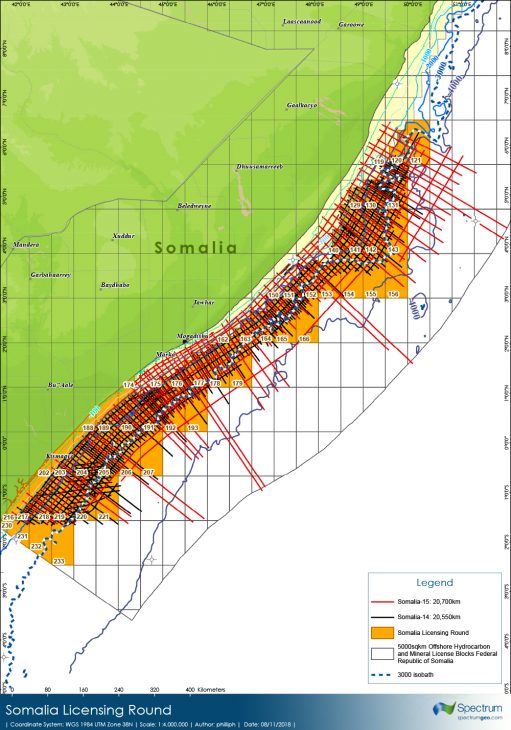 The Federal Republic of Somalia has confirmed that the country’s Petroleum Law has been ratified by His Excellency, President Mohamed Abdullahi Farmajo. The Presidential Ratification is a landmark moment in the development of Somalia’s natural resources, which will be transformational for the country’s development. Somalia has the potential to become one of the most significant plays offshore East Africa.

TGS offers 20,000 km of long-offset 2D seismic data offshore Somalia, which has been used to de-risk source rock presence, distribution and maturity. This data complements an additional 20,000 km 2D survey, also offered by TGS. This is the only data available over the blocks of the first Offshore License Round and TGS has an exclusive agreement with the Somali government to market this data to interested parties.

As part of the Petroleum Law, The Somali National Oil Company (SONOC) has been established as a government-controlled entity charged with participating in petroleum operations, while provision is also made for a Somali Petroleum Authority to act as a regulatory body overseeing oil and gas activity.

This recent development now paves the way for the conclusion of Somalia’s first Offshore Somalia License Round, with an expected closing date for submissions of bids at the end of Q3 2020.  In conjunction with the license round, a roadshow is scheduled in Houston, Texas on 31st March where confirmation of the offshore blocks in the region will be announced.

‘Offshore Somalia remains one of the last truly frontier margins in the world. Ratification of the Petroleum Law in Somalia is a major step in the country’s journey to developing its offshore hydrocarbon reserves. TGS is delighted to be a part of this story with exclusive seismic data in this highly attractive margin – one which offers outstanding exploration opportunities.’