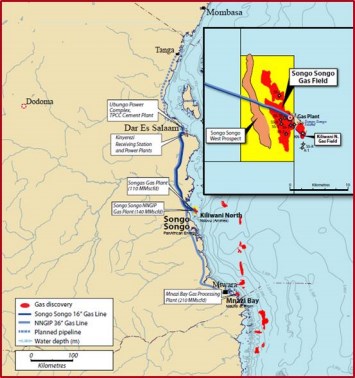 Swala Oil and Gas entered into an agreement with Orca Exploration to acquire up to 40%  interest in the Songo Songo producing assets currently held by the international finance corporation (IFC) for $130 million based on an agreed value of US$325 million as earlier announced in August.

According to Orca Swala has agreed, subject to conditions, to acquire up to 40% of the outstanding shares of Orca’s wholly owned subsidiary, PAE PanAfrican Energy Corporation (PAEM), a Mauritius-registered company and the sole shareholder of PanAfrican Energy Tanzania Limited (PAET) for a purchase price of US$130 million.

On 2nd January 2018 Orca announced that it has executed and delivered into escrow definitive agreements providing for an up to US$130 million investment by Swala Oil & Gas (Tanzania) plc in the Orca Group.

Of this amount, US$16.3 million will be paid by issuing 16.3 million Preferred Shares to Orca, subject to shareholder approval at the Company’s upcoming Annual General Meeting. If the issuance of Preferred Shares is not approved within 45 days, then Swala shall pay Orca the equivalent amount in US dollars plus interest on the balance of the purchase price owing at a rate of 10% per annum from the closing date until the date of payment. A further US$24 million shall be satisfied by SPL assuming through its share ownership a prorata share of the obligations under an IFC loan agreement entered into by PAEM’s wholly-owned subsidiary, PanAfrican Energy Tanzania Limited (“PAET”).

The acquisition financing has been arranged by Exotix Capital, a London-based specialist frontier markets investment bank. Exotix has placed a gross US$25 million from US institutions under an early bird 144A USD bond offering, a first for a Tanzanian company.

Tanzanian, East African and international investors will be accessed in January for a second tranche fundraising via a new Tanzanian bond and additional tapping of the 144A USD bond. Swala also conducted a roadshow in Uganda, Kenya and Tanzania in early-August and received significant investor interest. Contemporaneously, the Company has submitted a prospectus for the issuance of US$50 million USD-linked Tanzanian Shilling bonds (with greenshoe rights) for approval by the Capital Markets and Securities Authority (CMSA).

The following table sets out the consideration to be received by Orca on each tranche of the investment transactions, before and after taking into account the expected partial repayments of the principal balance of the IFC loan:

Closing of the second and third tranches would be subject to the satisfaction or waiver of certain conditions precedent, including Swala and Swala PAEM raising the necessary funds to complete the remaining investment transactions and approval by the boards of directors of Orca, Swala PAEM and Swala.

In addition to receiving the approval of the TSX Venture Exchange, completion of the investment transactions is subject to the approval of IFC.  Orca expects to enter into an amendment and consent letter with PAET and IFC pursuant to which:

·         PAET will agree to repay the IFC loan facility in part based on the proportion to the total percentage of PAEM Shares sold to Swala PAEM and, in any event, all of the outstanding principal amount by no later than December 10, 2019;

·         upon each closing occurring under the Investment Agreement, IFC’s 7% participation interest would be reduced pro rata with the percentage of the PAEM Shares sold to Swala in consideration for PAET paying IFC the sum equal to the liquidity participation interest (10%) of the proportion of PAEM sold based on a valuation of US$325 million; and

·         the parties would agree to make certain amendments to the IFC loan agreement and related financing documents in connection with the foregoing.

Under the Investment Agreement, Orca would have the right to monetize the benefits of certain assets, and the obligation to bear the burden of certain liabilities of the Tanzanian business that relate to the period prior to 1 January 2017 (the “Effective Date”).

Pre-effective date assets include, among other things, the right to receive payment of the arrears of Tanzania Electric Supply Company Limited and arrears owing by Songas Limited as at the Effective Date, being a total of US$125.3 million, less an estimated US$51 million in TPDC Profit Gas payable under the Production Sharing Contract for the Songo Songo field on receipt of net revenues realized from these arrears.

“This is a transformational transaction for Orca. To the broader Orca Group, this investment is strategic in both underpinning the intrinsic value of our business and providing a platform from which to grow and diversify our company and deliver value to our shareholders. In respect of our investment in Tanzania, Orca has for some time sought the right partner for a minority stake, and we welcome Swala’s participation, and importantly Swala’s ability to attract and engage both recognized international institutional investors as well as Tanzanian investors to the business,” says Orca Chairman and Chief Executive Officer, W. David Lyons.

Orca will retain the right to appoint a majority of the directors to the board of PAEM notwithstanding the completion of Swala’s entire 40% investment in PAEM. Subject to certain exceptions, decisions of PAEM shall be made by a simple majority vote of the directors of PAEM. Shareholders of PAEM will be entitled to nominate one or more directors to PAEM’s board based on the percentage interest held by the shareholders. Each Nomination Right will be represented by a 20% block of interest in PAEM. In the event that Swala’s shareholders’ interest in PAEM is 5% or more, but Swala is not entitled to a Nomination Right, Swala would be entitled to nominate one person, as an observer.