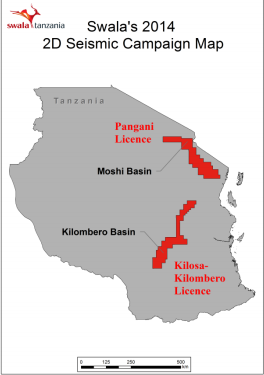 Also in 2014 the Company listed on the Dar es Salaam Stock Exchange with 7.5 million shares held in trust for the benefit of the communities in the areas in which the Company operated. Based on the current share price, this trust has a value of $2.5 million (TZS 5.5 billion).

In 2015 the Company processed the additional seismic data and prepared to drill Kito-1 in 2016. The Kito Prospect has been assessed by an independent third party as potentially containing up to 185 million barrels of oil (contingent resources). Of this, and if successful, the equivalent of nearly 80% would go to the Government of Tanzania through a combination of royalties, profit-sharing and various taxes, a sum of nearly $9.9 billion (TZS 21.9 trillion) at current oil prices.

The drilling area is contained within a Game Controlled Area and the Company carried out an Environmental Impact Assessment (“EIA”) assessing the potential impact of the drilling on the local environment. The EIA review process by institutions which is under the Vice president’s Office (VPO) insisted on certain changes that were detrimental to the environment and which were eventually reconsidered. This process resulted in the EIA not being approved in time for the Kito-1 well to be drilled in 2016 and forced the operations to be postponed to 2017.

In 2017, and following the approval of the EIA, the Company required a final permit from the Tanzania Wildlife Authority (“TAWA”). The failure by TAWA to provide this permit forced the drilling operations to be postponed to 2018.

On the 27th March 2018 the the Company advised the Tanzania Petroleum Development Corporation (“TPDC”), that it required all permits to be in place by the 20th April 2018 to allow the safe drilling of Kito-1 in 2018. This timetable was again notified to TPDC, the Petroleum Upstream Regulatory Authority (“PURA”), the Ministry of Energy (“MOE”) and the Ministry of Natural Resources and Tourism (“MNRT”) on the 3rd April 2018.

On the 29th March 2018, TPDC advised the Company that the MNRT required an in-house assessment of the impact of the Kito-1 drilling programme on the Stiegler’s Gorge Hydroelectric Project. This project, currently under construction, is located some 200kms to the North-East of the Kito-1 site, was first proposed during the presidency of President Nyerere and involves the construction of a dam designed to contain up to 34 billion m3  of water fed by the Rufiji river complex. The Kilombero River, close to the Kito-1 site, is part of this Rufiji river complex.

The drilling operations are expected to last 21 days and use some 76m3 of water a day, resulting in total usage of some 1,580m3  of water (less than the water used in an Olympic-sized swimming pool). This water will be used for drilling rig operations and mainly regained by the river system. In 2016 the Rufiji Basin water board, which was heavily involved in the Stiegler’s Gorge design and development, approved the use of these volumes of water. This information was included in the EIA, approved by the Vice President’s Office and NEMC.

Swala says it now considers the additional requirement to assess the impact of removing up to 1,580m3 of water from the catchment area of a 34 billion m3 dam – which is yet to be built – to be unreasonable. It also considers the time taken for such an MNRT internal assessment to be unjustifiably long. The assessment had not been completed, and the TAWA permit not been received, by the 20th April 2018 and the Joint Venture had no alternative but to declare Force Majeure under the PSA.

‘We are disappointed and frustrated by this last-minute requirement from MNRT. Over the past 6 years the Joint Venture has invested a total of $ 20.7million in exploring the Kilosa-Kilombero area and has been trying for three years to drill a prospect that could have a value of nearly ten billion dollars (TZS 21.9 trillion) to Tanzania as well as flow-through benefits to the local communities. At this point, the Joint Venture has no alternative but to declare Force Majeure under the PSA but fully expects that the Force Majeure shall be lifted once all permits are in place to allow the safe drilling of Kito-1 in 2019,” said Swala CEO Dr. David Mestres Ridge.

In the meantime, Swala says will focus on its ongoing acquisition of additional equity in PAE PanAfrican Energy Corporation as previously advised to the market on the 2nd January 2018; on the cross-listing approved by shareholders at the AGM on the 31st January 2018; and on the development of a balanced portfolio in Tanzania and elsewhere