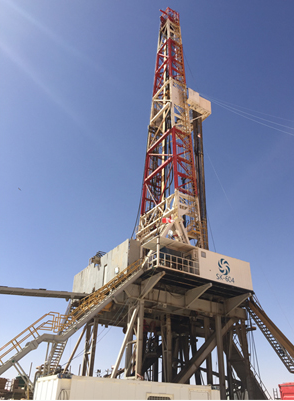 Drilling of Pate 2 well in Lamu’s Block L4 could continue this late July or early August after the much awaited ship carrying the 2600hp Sakson SK604 rig arrived in Mombasa last week. The rig will then head off to Mtandawanda port in Lamu East aboard a barge hired from a local company with the expected arrival date expected to be Thursday. According to sources the massive rig will afterwards be offloaded for transportation to the drilling site some 16 kilometers away before being assembled for drilling an exercise expected to take about a month all together.

The Sakson SK604 rig which was transported from onshore Algeria some 800km off the port of Tunis is expected to drill the Pate 2 well from the current 300 meters to the expected total depth of 4500 meters before proceeding to the Pate 3 well depending on the success of the first well.

The commencement of the continued drilling is however in doubt as Gas & Oil Exploration Consultants Limited (GASOILEX) Sakson’s former Kenyan agent fell out with the rig owner Sakson Drilling & Oil Services over unpaid commissions with the agent promising to get an injunction against the Dubai based company this week.

Already the wells have spud using a top-hole drilling rig from Kenyan drilling company Drilling Spares & Services Limited (“DSSL”) and run 20-inch casing for both Pate-2 and Pate-3 wells to 300 meters in a bid to beat the earlier spud commitment date.

Zarara Oil and Gas Limited (‘Zarara’) which holds a 75% working interest is a 100% subsidiary of Midway Resources. CH-Swiss Oil Holdings International holds 15% and the National Oil Company of Kenya at 10%. MRI has negotiated a legally binding heads of agreement for the eventual acquisition of the 15% interest of CH-Swiss Oil Holdings