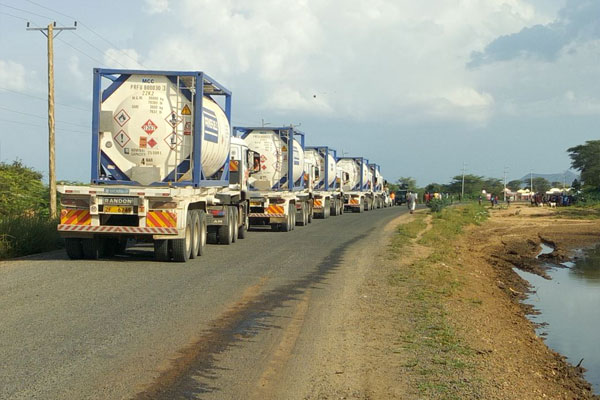 The transfer of stored crude oil from Turkana to Mombasa by road under the early oil pilot scheme (EOPS) commenced on 3 June 2018 has to date transported 70,000 barrels according to Tullow Oil. To date the firms contracted including Prime Fuels, Oilfield Movers, and Multiple Hauliers to transport crude oil continue to transport approximately 600 bopd. However, going by January figures (January Operational Update) of 60,000 barrels stored in Mombasa this would mean that the company is transporting at least 10,000 barrels a month far below the reported 600bopd but perhaps rather the earlier reported rate of 600 barrels per trip with an average of eight trucks being dispatched every two days.

This load expected to increase to 2,000 bopd in April 2019 once the EOPS is fully operational which would mean at least an average of fourteen trucks being dispatched every day with each round trip taking 10 days. The maiden lifting of Kenyan crude oil remains set for mid-2019 with Tullow reporting that it has begun to market Kenya’s low sulphur oil ahead of this first lifting with initial market reactions termed as very positive. This first shipment is expected to help the country avail its product to the international market with the crude destined to Asian refineries.