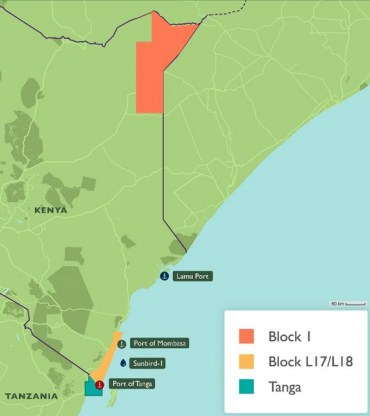 Octant Energy which took over from Afren operated Blocks 1, L17 and L18 plans to carry on with already identified drill ready prospects in the three blocks as well as 2D seismic in south Eastern part of the Mandera basin to futher provide more information at El Wak.

This is according to its presentation in Cape Town recently where it announced the initial four well drilling campaign for Kenya as these licenses have already seen extensive 2D and 3D seismic acquisition which has materially de-risked assets as well as seen Environmental Impact Assessments approved in two blocks.

Although it is unclear as to which blocks the company will begin with block 1 has two highlighted large prospects of the 5 leads identified while in block L17/ L18 the company has identified three prospective drilling prospects.

Octant Energy a company whose management includes Rick Schmitt former President of Marlin energy the company that sold the licenses to Afren in 2010 (where he served as President & CEO of its subsidiary East Africa Exploration EAX) earlier in the year announced  it had entered into a term sheet with Rosseau Asset Management to proceed with a financing of up to USD$10,000,000 through the issuance of secured convertible debentures to finance the acquisition of Afren’s assets in East Africa namely Kenya’s Block L17/L18 and Block 1 as well as the Tanga Block in Tanzania

Block 1 is located on the western margin of the Mandera-Lugh basin and comprises an area of 22,250 km2 while Block L17/L18 is located onshore and offshore in the Tembo coastal basin in southern Kenya. The block covers an area of approximately 4,905 km2 and water depths vary from a few meters along the shoreline up to approximately 500 m.

Other than the three blocks the company also acquired assets owned Imara Energy assets in the onshore Lamu basin by acquiring the company.