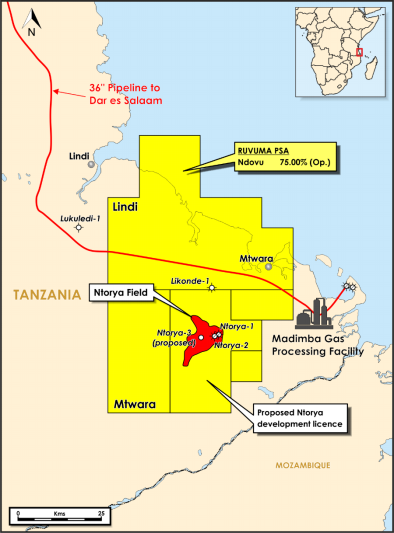 Aminex has announced a further material increase in its management estimate of gas initially in place (GIIP) in its Ntorya appraisal area in the onshore Ruvuma Basin of Tanzania from unrisked resource estimates of 466 BCF Pmean GIIP to approximately 1.3 TCF Pmean GIIP.

According to Aminex this update is based on ongoing technical work which includes data from the successful Ntorya-2 appraisal well and subsequent re-evaluation of existing seismic, including reprocessing of select seismic lines and detailed review of Ruvuma PSA well data.

“These management estimates cover the Ntorya appraisal area only and do not include the potential of the adjoining exploration acreage.”

The Company adds it is in the process of engaging an independent third party auditor to prepare an updated reserves and resource report.

“The updated modelling, mapping and corresponding resource numbers continue to confirm that the Ruvuma Basin is of significant importance to Tanzania and the Company. We continue to work directly with the Tanzania Petroleum Development Corporation to create an optimal development plan so as to begin gas production from the licence as quickly as possible,” says CEO of Aminex Jay Bhattacherjee.

“The updated modelling, mapping and corresponding resource numbers continue to confirm that the Ruvuma Basin is a major resource for Solo and its partner, Aminex, and is of significant national importance to Tanzania.  We and Aminex are working with the TPDC on an optimal development plan to begin the Ntorya Field into production as quickly as possible,”Neil Ritson, Executive Chairman of Solo, commented.

The operator is currently working with io oil & gas consultancy (a joint venture between Baker Hughes, a GE Company, and McDermott) to prepare a gas commercialisation plan which, together with submission of the Ntorya Field development plan to the Tanzania Petroleum Development Corporation, is expected to be completed in early September.