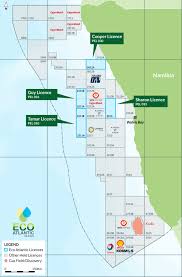 ·    Eco says it continues to benefit from a strategically significant acreage position in-country and is progressing its various work programmes offshore Namibia. The company is witnessing an increased interest from multiple IOCs in Namibia.

·    The Company adds it continues to monitor upcoming drilling activity in the region, which could potentially see up to five exploration wells drilled on behalf of ExxonMobil, Total, Maurel & Prom, Shell and ReconAfrica in the next 12 months, expected to start Q4 2020.

“In Namibia, we continue to see increasing interest in the country’s offshore oil potential, especially with another set of exploration wells planned by other operators over the coming 12 months.  We have an important strategic acreage position offshore Namibia and expect any successful drilling activity in the region to benefit us.

“Despite the challenging macro backdrop, Eco has a resilient business model and has taken decisive action to preserve the Company’s liquidity.  We continue to benefit from strategically important acreage positions in two exploration hotspots and from a strong partnership and cooperation with our biggest shareholder Africa Oil Corp., and I look forward to updating the market on developments over the coming months.”

In Namibia, the Company holds interests in four offshore petroleum licenses totalling approximately 25,000km2 with over 2.3bboe of prospective P50 resources in the Walvis Basin.  These four licenses, Cooper, Guy, Sharon and Tamar are being developed alongside partners Azinam and NAMCOR. Eco has been granted a drilling permit on its Cooper Block (Operator).