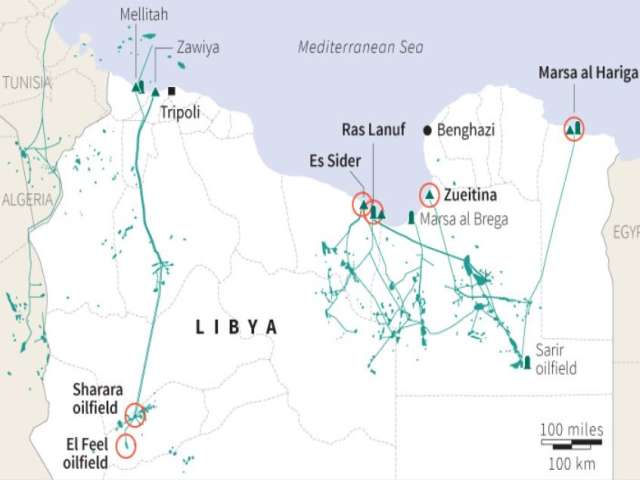 Libya has said it is planning for gradual resumption of oil production across various fields even as the national oil company continues to monitor closely the security situation at all its sites, including the safety of workers, facilities and equipment in both fields and ports.
This follows the lifting of force majeure on Tuesday, September 22, 2020 with the operator of the Zueitina Oil Company already instructed to initiate production arrangements. This was after a security assessment of Zueitina port and Zueitina Oil Company’s fields showed a significant improvement in the security situation that allows the National Oil Corporation (NOC) to resume production and exports to global markets.
Zueitina Oil Company is the main supplier of LPG  and also an important source for the coastline system, which enables the rest of the operators to supply the North Benghazi and Zueitina power plants with gas, which alleviates the suffering of the people in the greater city of Benghazi and its suburbs and provides clean and regular natural gas.
The ports of Hariga, Brega and Zueitina are therefore classified as safe ports. Evaluation continues at the remaining oil fields and ports according to the safety and security standards in force in the national oil sector.
Following the new developments Libya has met with ambassadors from Italy and Germany. Joint cooperation between NOC, Italian and German companies in the oil and gas sector was discussed.

In its recent financial report the National Oil Corporation (NOC) reported oil, gas and condensates export revenues of USD38.2 million in July 2020, a hugely damaging drop compared to USD2.1 billion in July 2019. This is the lowest one-month revenue figure recorded this year. NOC registered USD24.7 million from sales of crude oil, USD12.8 million from gas and condensate sales, and USD647,346 from sales of petrochemicals.

In August, NOC registered a modest rise in revenues after a brief and limited cessation of the blockade allowed it to ship a quantity of crude oil from the storage tanks of Es Sider port. In consequence, it reported revenue of just over USD90 million compared to USD 2.0 billion in August 2019. NOC registered USD74.4 million from sales of crude oil, USD14.7 million from gas and condensate sales, and USD829,204 from sales of petrochemicals.

To date, the blockade has cost Libya almost USD 10 billion, a devastating loss most especially during this period of national crisis.