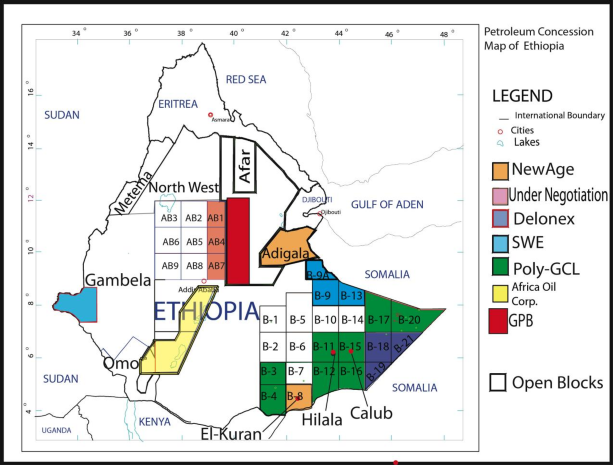 Sedimentary basins cover more than 30 percent of the entire country and the known basins include: Ogaden basin, The Abay/Blue Nile basin, The Gambela basin, Mekelle basin, Southern Ethiopia basin and the Metema basin.

Oil seeps have been identified in various parts of the country including: the Daga Shebel oil seep, the Gelomso oil seep, the Derkale oil seep among others while oil and gas shows have been in many exploratory wells.

Four petroleum systems have been identified in the Ogaden basin in the past including the Bokh shale, Urandab shale,the Adigrat formation in the transition zone as well as the middle Hamnlei carbonates and the Lower Hamnlei reefal buildups. Recently the country has identified a new petroleum system the Bokh Shale-Gumburo sandstone.

Ethiopia also has non-conventional hydrocarbon potential in different parts of the country ranging from 400 meters to 800 meters with high TOC up to 60 percent.Oil shale occurences have been reported in the south west part of the country as well as central Ethiopia.

Ethiopia has registered a number of recent discoveries mainly gas at the Genale and El Kuran areas located in Block 4 as well as old discoveries of up to 6.5TCF all in the Ogaden basin.

The country has many open blocks in the greater Afar block, the Mekelle basin,the Segen rift basin, the Abay basin and the Ogaden basin.

The get a copy of the more comprehensive overview drop an email to info@oilnewskenya.com. A copy cost $100.