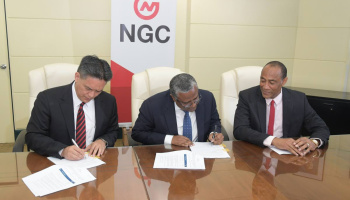 The National Hydrocarbons Company (ENH) and the National Petroleum Company of China (CNPC) reiterated their commitment to work together for the development of the hydrocarbon industry in Mozambique.

The desire was expressed by the Chairman of the Board of Directors (PCA) of ENH, Omar Mithá, and CNPC’s Vice-Chairman, Hou Qijun, during the meeting of the Joint Cooperation Committee of the two companies in the oil and gas sector. took place in Maputo in May.

At the time, the parties signed two memoranda of understanding in order to strengthen their cooperation, one for the extension of the Cooperation Agreement and the second for the Training of ENH technicians in the oil and gas fields.

At the time, ENH’s PCA recalled that China supported Mozambique during the struggle for liberation of the Portuguese colonial regime, and today it is important to translate these ties of brotherhood into “economic relations with mutual benefits.”

“It is therefore important to embark on a cooperation platform with joint actions that can bring tangible economic benefits to our countries. And I’m sure that with the commitment of our companies, with our delivery and intelligence, we will move forward, “said Mitha.

Mr Qijun said the memorandums of understanding had been signed as “a promising future” in tightening the cooperation ties between the two companies in the field of oil and gas.

“I want to reinforce our commitment to the implementation of the agreed memorandums and the work plan,” he said, noting that “we will do our part to achieve the objectives of the cooperation agreement.”

It should be noted that ENH and CNPC are partners in Area 4 of the Rovuma Basin, where the Chinese company acquired an indirect stake in 2013 through Eni East Africa. Meanwhile, in May 2016, the two sides signed a two-year agreement aimed at strengthening their bilateral cooperation in the oil and gas sector.

From there to this part, the Joint Cooperation Committee between ENH and CNPC was established and several Memoranda of Understanding were signed, including one for the development of ENH human resources, through the implementation of training programs.