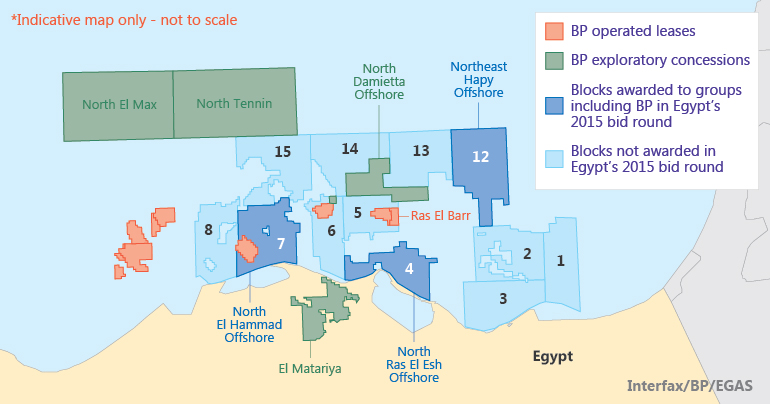 Eni (as the Operator of the Block), BP and Total (as Contractor members) have successfully drilled the first exploration well in the North El Hammad license, in the conventional Egyptian waters of the Nile Delta, on the prospect called Bashrush.

The new discovery is located in 22 meters of water depth, 11 km from the coast and 12 km North-West from the Nooros field and about 1 km west of the Baltim South West field, both already in production.

The well discovered a single 152 meters thick gas column within the Messinian age sandstones of the Abu Madi formation with excellent petrophysical properties. The well will be tested for production.

Eni, together with its partners BP and Total, in coordination with the Egyptian Petroleum Sector, will begin screening the development options of this new discovery, with the aim of “fast tracking” production through synergies with the area’s existing infrastructures.

In parallel with the development activities associated with this new discovery, Eni will continue to explore the “Great Nooros Area” with the drilling, this year, of another exploration well called Nidoco NW-1 DIR, located in the Abu Madi West concession.

The discovery of Bashrush is further demonstration of the effectiveness of Eni’s “incremental” exploration strategy, aimed at selecting high value opportunities and ensuring fast development of the new discoveries through existing infrastructures.

In the North El Hammad concession, which is in participation with the Egyptian Natural Gas Holding Company (EGAS), Eni through its affiliate IEOC holds 37.5% interest, the role of Operator, BP holds the 37.5%, and Total holds the 25% of the Contractor interest.

Eni has been present in Egypt since 1954, where it operates through IEOC Production. The 2020 equity production of IEOC is in the range of 280,000 boepd.