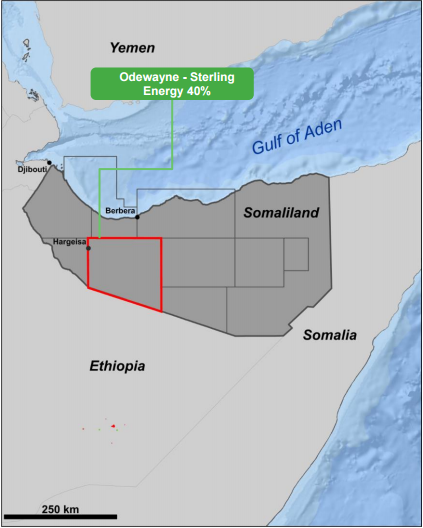 Oil and gas exploration drilling in Odewayne block is two to three years away according to block joint venture partner Sterling Energy in its latest presentation to shareholders.

The block which is operated by Genel Energy and currently in the third period (after recieving a further 2 year extension to the current period of the Odewayne Production Sharing Agreement) expected to end in November 2018 still awaits the acquisition of 500km 2D seismic data having completed airborne gravity and magnetics survey in 2013.

As per the partners the acquisition of 500km 2D seismic data is scheduled to commence 1H 2017 and will include Odewayne block and acquisition of data will satisfy minimum work obligation for Period 3.

Another acquisition of 1,000km of 2D seismic data is expected to commence in Period 4 commencing in November 2018 to May 2020 with one exploration well expected thereafter.

Somaliland’s Odewayne block is located on an unexplored Mesozoic rift basin and currently has no seismic control and no drilling to date.

The Rift basin is interpreted to be deep enough for Jurassic source rocks to be mature (3.5km+), possibly of Permo-Triassic Karoo age with an active petroleum system confirmed by oil seeps within the block.

A sub-surface basin structure was  identified by 2013 aero-magnetic survey including a multiple 3-way fault controlled traps likely with sedimentary fill as key unknown.

The seismic operations in Somaliland have been temporarily suspended for a while due to deterioration in the security environment.

Operator estimates of the potential of the basin are in the order of 1Bn bbls.