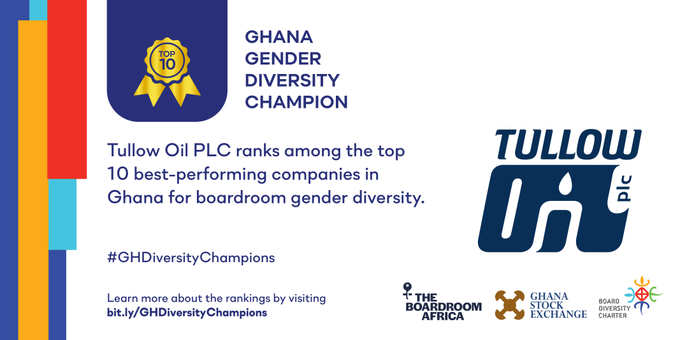 Four Ghanian listed companies in the extractives have been named in the Top 10 Champions of Gender Diversity in Ghana including: AngloGold Ashanti Limited No.4, Tullow Oil No. 6, Ghana oil Company Limited No. 7 and Golden Star Resources Limited.

Tullow Oil has been named one of the Top 10 Champions of Gender Diversity in Ghana as part of the 2020 Ghana Gender Diversity Index – The Boardroom Africa  annual study of gender diversity among publicly listed companies in Ghana.

According to the study the energy (oil and gas and power sector had 67% of companies have 30% or more female directors. Tullow Oil Plc has 38% Female Board Directors,
40% Female Non Executive Directors and a Female Chair.

The Ghana Oil Company was also named in the list with 33 percent female board directors and 38 percent Non Executive Directors.

In ranking listed companies, the study weighted the percentage of female board directors and non-executive board directors equally. The accumulated values were then filtered and ranked in order of magnitude.

Among key findings of this year’s annual study include: