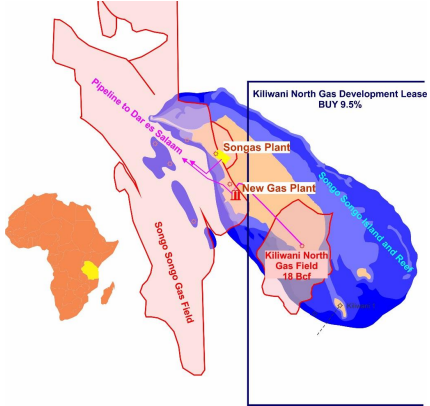 The Kilimani North Development License (which contains the Kiliwani North field and Kiliwani South prospect)joint venture comprising of Ndovu resources, RAK Gas and Solo Oil have taken over Bounty Oil & Gas interests following the company’s failure the meet its commitments as per the joint operating agreements.

According to license operator Aminex which owns 100% of Ndovu Resources a result of payment defaults by Bounty Oil & Gas, Bounty is now deemed to have transferred its interests in such assets to the Company’s wholly-owned subsidiary, Ndovu Resources, and the other non-defaulting parties.

The transferred interests include all rights and liabilities except that Bounty will, pursuant to the joint operating agreements, remain liable for its share of any outstanding work commitments and abandonment costs.

Following the exit of Bounty Oil & Gas as a joint venture partner and the transfer of the interests to the JV partners Aminex’s interests in the Kiliwani North Development Licence  and the offshore Nyuni Area PSA have therefore increased by 6.383% and 6.6667% respectively and now stand at Ndovu Resources 63.8304% while those of RAK Gas increased to 27.7778% and Solo Oil to 8.3918%. Ndovu Resources now holds 100% of Nyuni Area PSA.

Bounty Oil and Gas NL is an independent Australian oil and gas explorer and producer. It was formed in 1999 and listed on the Australian Stock Exchange in February 2002.