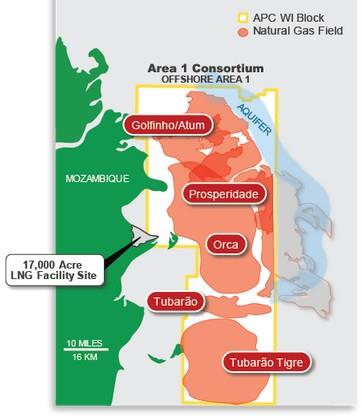 Anadarko Petroleum has announced that Mozambique LNG1 Company, the jointly owned sales entity of the Mozambique Area 1 co-venturers, has signed a Sale and Purchase Agreement (SPA) with Bharat Gas Resources, a wholly owned subsidiary of Bharat Petroleum Corporation Ltd. (BPCL). The SPA is for 1 million tonnes per annum (MTPA) for a term of 15 years.

‘In addition to BPCL being an upstream equity co-venturer in the Mozambique LNG project, we are also pleased to have them as one of our foundation customers,’ said Mitch Ingram, Anadarko Executive Vice President, International, Deepwater & Exploration. ‘With this agreement, Mozambique LNG now has executed more than 8.5 MTPA of SPAs. India’s role in the global LNG market will continue to grow with Mozambique LNG being a natural supplier given its geographic proximity and 30-percent Indian state-owned interest in Mozambique LNG. We are grateful to BPCL for its support of Mozambique LNG and look forward to providing a long-term, reliable source of cleaner energy for many years to come.’