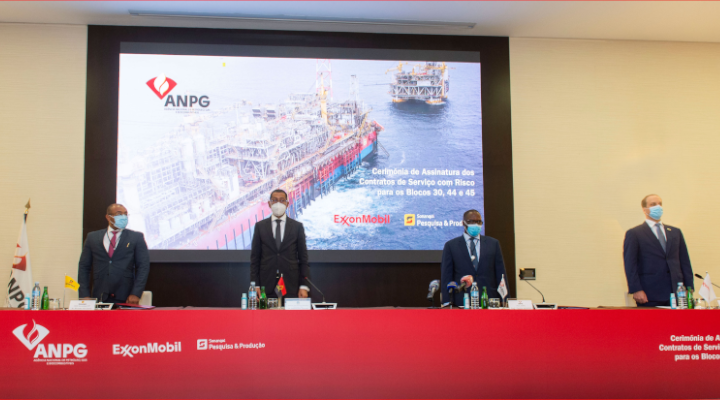 The National Oil, Gas and Biofuels Agency (ANPG) signed today, three Risk Service Agreements with ExxonMobil and Sonangol P&P that make it possible to increase the exploration area in the offshore area Angola), over 17,800 square kilometers.

These agreements will make it possible to identify the potential of hydrocarbon resources existing in the Namibe basin. It is recalled that until now the Namibe Basin was an unexplored maritime zone in Angola.

ANPG, welcomes the signing of these Contracts and underlines the advantages inherent to ExxonMobil’s presence in the Namibe Basin, which will allow to deepen the geological knowledge, as well as to explore the hydrocarbon potential there On the same occasion, Paulino Jerónimo underlined that “the success of the work carried out in Angola by international operators, many of whom already have a consolidated presence in the country, is an extremely important factor for the development and credibility of the Angolan oil sector”.

“We will work with the Angolan government and ANPG to identify the border areas with the best resource potential, applying our proven experience and our cutting-edge technology,” said Andre Kostelnik, ExxonMobil’s General Manager in Angola , adding that ” these new concessions are the result of the long success history of our exploration and production activities in Angola. ”
ExxonMobil is the operator of Blocks 30, 44 and 45, with an associative participation of 60%, with Sonangol Pesquisa e Produção, SA (Sonangol P&P) having an associative participation of 40%.

Sebastião Gaspar Martins, Chairman of the Board of Directors of Sonangol, in turn, considers “the extension of prospecting and exploration activities to an area unexplored in Angola to be extremely important, but that everything indicates has the potential to increase hydrocarbon production. in Angola. Being able to participate in this challenging project, we are excited and launch challenges that we will surely be up to. ”ngo basin,